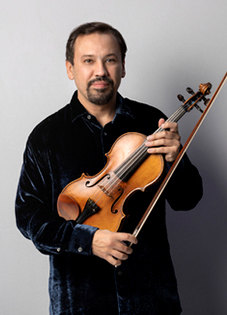 Violinist Daniel Khalikov commands the world stages as a soloist, chamber and orchestral musician.
Born in Tashkent, Uzbekistan, Khalikov is the third generation of a highly respected family of classical musicians. Khalikov was a founding member of Chamber Orchestra of New York and then, in 2008, became a member of the Metropolitan Opera Orchestra.

At Lincoln Center, and with the Met Opera Orchestra on tour, Khalikov has collaborated with such illustrious conductors as Levine, Muti, Rattle, Gergiev, Barenboim, Luisi, and Gatti in productions ranging from John Adams to Giuseppe Verdi. As a member of the Met Orchestra, Khalikov is in part a recipient of the numerous Grammy Award recordings won by the Orchestra.Over the years Khalikov has performed with Chamber Orchestra of New York as visiting concertmaster for Carnegie Hall concerts and high profile productions such as the Dolce & Gabbana show at Lincoln Center for the Performing Arts. He was also featured as a soloist in violin concertos by Vivaldi and J.S. Bach.
As a chamber musician, Daniel Khalikov has performed alongside his mentor Pinchas Zukerman, Yefim Bronfman, and Emanuel Ax, at music festivals of Santa Fe, Tanglewood, Verbier, Norfolk, Music Mountain, the Perlman Music Program, the MET Chamber Players, and Lake Tahoe Summerfest.