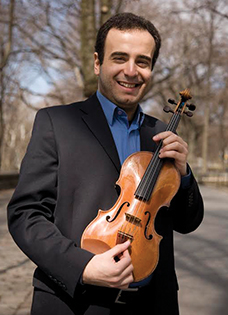 Hungarian born violinist, Bela Horvath began to play the violin at age 3. Starting his violin studies with his grandfather, Bela immediately showed outstanding talent for the violin. Therefore he was taken to the famous Hungarian violin teacher, Valeria Baranyai, with whom he studied with for many years. During those years, Bela won a number of national violin competitions in Hungary, as well as a few international violin competitions in Prague and Vienna.

In 1996, Bela entered the Bela Bartok Conservatory, where he studied with former first violinist of the Festetics String Quartet, Istvan Kertesz. Bela won the National Janos Koncz violin competition in Hungary in 1997. The following year, he entered the 9th International Carl Flesch Violin Competition. As the youngest contestant, he won the 4th prize as well as a special prize for the best interpretation of Miklos Csemicky`s Solo Sonata for violin

In the year of 2000, Mr. Horvath entered the Franz Liszt University of Music, where he began his studies with Hungarian concert violinist, Miklos Szenthelyi. In 2002, the renowned violinist, violist, and conductor, Pinchas Zukerman invited Mr.Horvath to study with him and his associate, Patinka Kopec, at the Manhattan School of Music in New York City. During his studies in New York, Bela Horvath has worked with the world`s leading violinists and pedagogues such as, Zakhar Bron, Leonidas Kavakos, Jaime Laredo, Gyorgy Pauk, Ruggiero Ricci, Aaron Rosand, and Joseph Silverstein. Mr. Horvath has also played a great deal of chamber music and has been coached by chamber musicians and teachers like Daniel Avshalomov, Steven Dann, Eugene Drucker, Lawrence Dutton, Timothy Eddy, Joseph Kalichstein, RobertMann, Sylvia Rosenberg, David Soyer, and Michael Tree.

Bela Horvath made his debut recital at Carnegie Hall’s Weill Hall in 2003. The debut of his Piano Quartet, Amity Players, was at Carnegie Hall’s Weill Hall in October 2006. They have recently released a recording of two piano quartets by J. Brahms for the Canadian label, Marquis Music. As a soloist and recitalist, he has played many concerts around the world, including the Czech Republic, Austria, Germany, France, England, Slovakia, Hungary, the United States and Canada.

In February, 2008, he performed with Pinchas Zukerman at Carnegie Hall’s Zankel Hall. Mr. Horvath, has performed in Carnegie Hall`s Isaac Stern auditorium as a soloist in June 2008. Mr. Horvath completed his Bachelor’s and his Master’s of Music degrees at the Manhattan School of Music. He has been a faculty member at the Manhattan School of Music’s Pre-college division program since 2009.