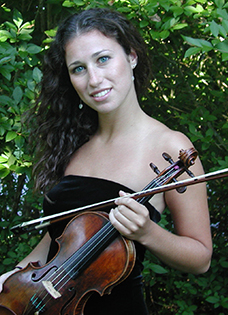 Sarah Charness has captivated audiences with her vibrant sound and vivacious performances. Sarah is a versatile musician, at home in the worlds of classical, contemporary, and popular music. Her performances have taken her from Lincoln Center to the Today Show.

Sarah is a graduate of the New England Conservatory Preparatory School, where she studied violin with Marylou Churchill, voice, chamber music, and orchestral performance. She earned her Bachelor of Music degree in violin performance under the mentorship of Andrew Jennings at the University of Michigan. Sarah was awarded a Surdna Foundation Scholarship to attend the Young Artist Orchestra and String Quartet programs at the Boston University Tanglewood Institute. Sarah also attended the Encore School for Strings, the Mark O’Conner Fiddle Camp, and the Henry Mancini Institute.

Sarah appeared at Carnegie Hall, Avery Fisher Hall, New York City Hall, and the Kennedy Center as a member of the Chamber Orchestra of New York and the Philharmonic Orchestra of the Americas. Sarah’s many chamber performances have taken her to Brandeis University, the Duxbury Art Complex Museum, the Noon Day Concert Series in Nantucket, the Newton Free Library, the Boston Public Library, the Boston Museum of Science, the Natick Center for the Arts, the DeCordova Museum, and the Museum of our National Heritage. Her performances have been broadcast on WCRB 102.5 FM in Boston, and she was featured on the National Public Radio. She was three times a finalist in the New England Conservatory concerto competition, a winner in the Brockton Symphony Concerto Competition, a semifinalist in the Fischoff National Chamber Music Competition, and a finalist in the University of Michigan concerto competition. Sarah has performed annually at the Nassau Coliseum and the Continental Airlines Arena with the Trans-Siberian Orchestra. She has backed up top recording artists Roger Daltry of the Who, Sarah Brightman, and British pop singer Mika. Sarah is a widely-sought teacher whose experience includes the New England Conservatory Charter School, Greenwood Chamber Music Camp, and numerous private students.