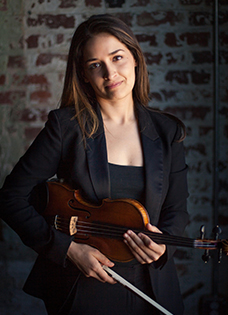 Caroline Drexler is a New York City based violinist. She is an enthusiastic orchestral musician and holds a tenured chair with the Chattanooga Symphony and Opera. In addition to Chamber Orchestra of New York, she can be seen performing with orchestras such as American Ballet Theater orchestra, Symphony in C, and the Savannah Philharmonic. Caroline’s NYC performances have taken her to venues including Carnegie Hall, Lincoln Center, and Merkin Hall.

As a recording artist, Caroline can be heard on projects for the Smithsonian Museum and Bungie Games. She has also appeared as a New York Fashion Week performer for designers such as Tory Burch and Dolce and Gabbana and as a guest performer on The Tonight Show.

Caroline performs often with the Desdemona Ensemble, an all female chamber ensemble dedicated to championing the works of contemporary composers. Performances with Desdemona include the Larsen Young Artist Spotlight chamber series with the Savannah Philharmonic.

She graduated with honors with a Masters in Music from the University of Tennessee.