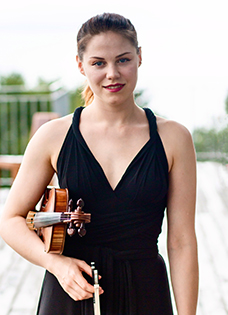 Violinist Holly Nelson is passionate about contemporary music and especially enjoys collaborating with composers. In 2019, she was named a Britten Pears Young Artist and performed in Aldeburgh, England where she was mentored by members of the London Sinfonietta as well as composers Matthew Collins and Mark Anthony Turnage. In 2018 she gave the premiere performance of Fabian Beltran’s work for violin and piano, Witchcraft-Incantos, at National Sawdust in Brooklyn, New York with pianist Huizi Zhang. In 2017, as a Contemporary Ensemble Fellow at the Atlantic Music Festival in Maine, she premiered 22 works and served as the festival orchestra’s concertmaster and from 2014-2015, she toured Switzerland and Luxembourg as a member of the Lucerne Festival’s Young Performance Ensemble, performing Tod Machover’s work Fensadense for 10 musicians and interactive electronics developed by MIT.

Also a lover of baroque music, in 2015, sponsored by an Arts Grant from the government of Taiwan, Holly completed a concert tour of three cities in Taiwan with harpsichordist Hsiu Tzu Ryan. Ms. Nelson has performed with some of the most sought-after early music ensembles in New York City: The Sebastians, Clarion Music Society and Project Amadeus. In 2015, she was invited as a full scholarship baroque violin fellow to The American Bach Soloists Academy in San Francisco. Other festival appearances include Domaine Forget, Banff, The Lucerne Festival Academy and the Baroque Performance Institute at Oberlin College.

Ms. Nelson is an Artist in Residence for 2019-2020 at Twin Towers Life Enriching Communities in Cincinnati, Ohio, where she curates a monthly chamber music series. She currently serves as Giora Schmidt’s teaching assistant at the University of Cincinnati College-Conservatory of Music (CCM) and also teaches in CCM’s Precollege Program.